Toronto FC defender Omar Gonzalez scored his first goal for his club at a crucial time as the 80th minute header secured a point on the road and extended Toronto’s unbeaten streak to nine games.

Toronto were coming into this game following a heartbreaking penalty shootout loss to rivals Montreal Impact in the finals of the 2019 Voyageurs Cup, in a game that determined who would be representing Canada in the 2020 CONCACAF Champions League. It was going to be interesting to see how the team would respond following the midweek game and if they’d be able to bounce back as they turn their attention to positioning in the MLS playoffs, where they are currently the 6th seed. 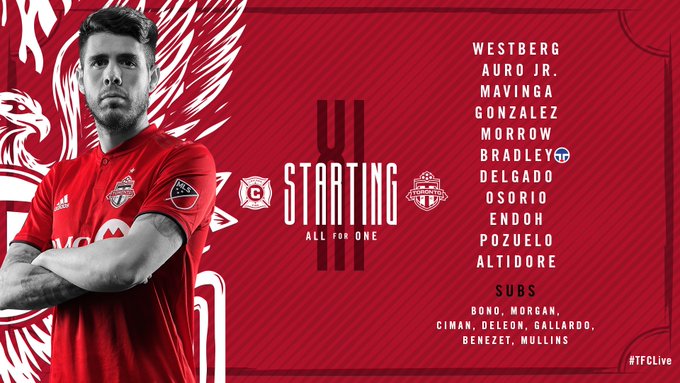 Greg Vanney went back to a 4-2-3-1 formation as opposed to the 4-3-3 formation he used on Wednesday; Quentin Westburg started in goal; Justin Morrow, Chris Mavinga, Omar Gonzalez, and Auro Jr. were on the backline; Jonathan Osorio and captain Michael Bradley played in the defensive midfield positions; Alejandro Pozuelo, Marky Delgado, and Tsubasa Endoh in the attacking-midfield; and Jozy Altidore as the lone striker up top.

Toronto were playing quite well with the change in formation and it allowed Altidore with more space to create plays and scoring opportunities because he was the lone striker and the attack would run through him. The 29-year old was engaged early on, which was a great sign for the team because it provided them with a scoring threat each time he had possession of the ball.

The game was fairly even and remained scoreless for the first half however, the game picked up in the second half with both teams getting on the scoresheet and had moments where they could’ve sealed a victory.

Altidore started it off when he received an excellent pass from Delgado and followed that up by getting a touch on the ball to move past the defender and struck the ball between Chicago goalkeeper Kenneth Kronholm to put Toronto up 1-0.

The lead would be short lived as Aleksandar Katai scored in the 68th minute, when he used his pace off the wing to get into Toronto’s box, then used the space available to strike a perfectly placed shot that beat Westberg on the far post to tie the game 1-1. Following the goal, Westberg needed to be subbed off as a result of smoke from fireworks that were let off nearby in the stands and was replaced by Alex Bono.

Bono made history when he was subbed on as this was his 100th appearance for the club, which passed Stefan Frei for most appearances in-goal for Toronto FC.

Unfortunately for Bono, Chicago would score on their first attempt on-goal, when Fabian Herbers headed the ball in the net following an excellent cross from Nicolas Gaitan, to give the Fire their first lead of the game.

Toronto would respond three minutes later, when defender Omar Gonzalez scored his first goal in a Toronto FC uniform when he headed the ball past Kronholm off a corner-kick. This was a crucial goal for the club as it helped seal another point on the road and extended their unbeaten streak to nine games.

Toronto will close out the 2019 MLS season next Sunday, when they host the Columbus Crew at BMO Field.

Will Goldberg Capture the Universal Championship at WWE Super Showdown?