Growing up an 80s kid, there were certain absolutes we were raised on; Saturday morning cartoons, 80s hair, clothing fashion and Mike Tyson's badassery. I was an unquestioned fan of Mike Tyson and knew his whole story: growing up in Brooklyn with only his mother he'd been arrested a mind-blowing 38 times by the age of 13. His discovery by boxer "Irish" Mike Stewart and introduction to Cus D'Amato; the well known boxing manager who was eventual legal guardian of Tyson after Mike's mother Lorna passed away when he was 16. Starting on March 6, 1985 I watched that man rack up 28 wins (26 by KO) in 18 months, culminating with a efficient 2nd round TKO against Trevor Berbick, becoming the youngest Heavyweight Champion ever at the age of 20.

For Christmas in 1987, I proudly received Mike Tyson's Punch Out for Nintendo and immediately ran upstairs to play it. To my never ending shame the first time I played I lost to Glass Joe...twice (I've since gotten better). His 1988 fight against Michael Spinks was considered by some the biggest fight in the 20th century; and I was anxious. What if the now 35-0 Tyson lost? My 12 year old self was terrified Tyson could lose. Tyson won, in 91 seconds. He was king of the world. But like many kings, he too would get dethroned. His marriage to Robin Givens was fraught with allegations of violence, abuse and mental instability (Tyson has since been diagnosed with bipolar disorder). In 1990 he lost his first fight and the title to Buster Douglas; an unknown 42-1 shot, and by 1992 was sent to prison for the rape of Desiree Washington. 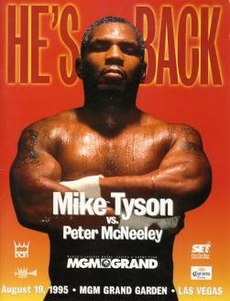 But he was still a draw. In 1995, his first fight after his release from prison, it took all of 89 seconds to KO Hurricane Peter McNeely in a Pay Per View fight that cost 50 bucks in 1995 money. I remember, I paid for it. McNeely would soon make bank lampooning his 89 second fight in Pizza Hut commercials, knocking himself out with pizza. In 1996 &amp; 1997 he'd lose the second and third fights of his career to Evander Holyfield. You'll remember the second one, it's the one where he bit part of Holyfield's ear off. Tyson went from “Baddest Man On The Planet” to mocked and lampooned; this pic was one example of many:

Mike Tyson...Getting An “Earful”. I'll see myself out.


Tyson retired from fighting in 2005 with a record of 50-6-2 after losing 3 of his last 4 fights. Since then, I've seen a different Tyson emerge. In many ways gone is the angry, violent man he was and in his place a softer; remorseful, more worldly Tyson. Granted, he credits weed as part of the reason he's mellowed, but this is a Mike Tyson that remembers who he is and what he did, both in and out of the ring, and aims to be better from it. His appearance in the 2009 comedy classic The Hangover did much to change people's opinion of him.  The movie was a smash success and his scenes were some of the best in the film. I feel he's grateful for that. Also, losing his 4 year old daughter in 2009 to accidental strangulation greatly impacted Mike Tyson the person. I've been impressed; even proud of who he's been able to become.

And here we are again. Mike Tyson climbing back into the ring for the first time in a decade and a half for an 8 round exhibition fight against former champion Roy Jones Jr. While on the inside it's a different Tyson, on the outside he appears the same. Same physique, same ferocity. I'm looking forward to this fight both with excitement and trepidation. This is easily the most anticipated fight of 2020 for the world of boxing even as an exhibition, but I fear the possible relapse he might have. He's spoken in the past of how putting on the gloves makes him a different person; the angry, violent person he's admitted he didn't like. Here's hoping he's strong enough to stay the Tyson he's grown to be.