Father’s Day has come and gone, but the feeling of having a special bond with a father figure will last a lifetime.

Whether he taught you how to throw a football or explained the meaning of a down, sporty dads are one of a kind. And thankfully, there is no shortage of them in the NFL.

Every dad is a beast in his own way on the field. However, they’re complete softies when it comes to being a daddy.

Only one can win the “World’s Best Dad” award. But make no mistake; the following fathers do a pretty, pretty good job battling it out for the title.

Lily Rose might just be the sweetest name ever. And Julian Edelman might also be one of the purest dads in the whole NFL.

He might not catch every ball, especially now that his best buddy Tom Brady is in Tampa, but he has captured our hearts when it comes to being the perfect daddy to his little girl.

Whenever he shares photos of Lily Rose, they’re in black and white tone, and you just get the vibe this dude really only loves two things in this life: football and family. Political stuff aside, Drew Brees looks like he’s an awesome daddio. He’s the father of four rambunctious youngsters, including three sons and one daughter.

He may not be as good as Jimmy G on the field (cough, cough 48-46), but his love for his family runs deeper than any hail marry Aaron Rodgers could possibly hurl into the end zone.

How do I know this? Any Pops who's okay with his son idolizing another team’s quarterback gets a huge W in my books.

That’s a whole new level of dad right there.

TB12 kills it on the football field. He’s an elite quarterback, hands down.

What you might not know is that Tom Brady also kills it as a daddy…in more ways than one (if you know what I mean, ladies).

Brady took a lot of heat on social media for kissing his kids on the lips. Which in the whole scheme of things is actually a beautiful thing. He is a proud papa and he’s not afraid to show it.

To top it off, he’s got the dad bod to go along with the job, so he’s basically a shoo-in. All jokes aside, Brady is very cute with his kiddos.

6 star worthy, for sure.

I almost wrote Indianapolis Colts beside this dude’s name because I’m still not used to the thought of him in a Steelers jersey.

Regardless of the jersey on his back, Ebron takes this whole daddy thing to the extreme. And when I say extreme, I mean he’s extremely adorable with his kiddies.

Most big, burly men struggle to show their emotional side, but not Ebron. He wears his heart on his Tweets and isn’t afraid to show everyone the best job in the world is being there for his two kidlets.

And we’re all here for it.

“It’s only my day because of you.”

Brian Hill posted this photo along with the above quote and now I’m totally smitten. Even if he does play for the Falcons, he’s clearly the running back of our baby daddy dreams. Firstly, this guy gets it when it comes to showing the social media world just how special his daughter is to him.

He’s one of the daddies on this list who’s fresh on the block of this whole Father’s Day situation and in his rookie season, he’s already putting up numbers that can’t be beat.

Keep this cuteness up and he’ll be the RDOTY (Rookie Daddy of the Year, duh).

These boys right here are my biggest motivators and my biggest achievement. Thank you for allowing me to take on the best position of my life—being a dad. Happy Father’s Day! How are guys celebrating? #FathersDay pic.twitter.com/6lgbHQG77K

I’m not crying, you’re crying. Robbie Gould has been kickin’ bombs in the daddy department ever since day one. Seriously, he gets a GOULD star when it comes to being a dad to his not one, not two, but three boys.

From the looks of it, Gould had an incredible upbringing through sport with his own father. And lucky for his little noodles, he’s using sports to connect with his family, too.

To top it off, Gould gives his boys donuts for days thanks to his sweet, sweet love for Country Donuts. Donut Saturday is definitely a thing in the Gould house and I’m a tad jealous.

Blessings on Blessings!!!! Best Job in the world! Fatherhood! pic.twitter.com/7IhFKv2n5b

Any parent who has to live through a child’s death is a real life warrior. And last year, Marvin Jones Jr. had to do just that. But rather than drown in the grief, Jones Jr. posted an emotionally powerful tribute to his son, Marlo, along with a beautiful photo on his Instagram following the tragedy.

It takes a strong person to share something so personal. His endless love as a father continues to shine as he shares his four other children with the world. He truly is captivated by their presence and it shows in every post via his social media platforms.

Just like being open on the field, Jones Jr. is an open book of emotion with his kids and that quality separates a good dad from a great one.

Alright, I may not be the biggest fan of the Seahawks, but that comes with the territory of being a 49ers fan. Despite never cheering for the Legion of Boom quarterback on the gridiron, I’m a huge fan of Mr. Wilson…off the field.

It’s no secret Wilson is an amazing father to his wife Ciara’s son, Future, who she had with her former fiancé, the rapper version of Future. Wilson worships the ground Ciara walks on, including the ground her son walks on, too. He constantly posts photos on his Instagram about his love for mini Future, which is honestly kind of inspiring, considering Wilson isn’t even the kid’s biological father.

Fast forward to his own children with his wife: Wilson gushes over his three-old daughter, Sienna. He takes #GirlDad super serious. And of course, Wilson and Ciara are expecting their second child together. This time, it’s a baby boy.

Hopefully Wilson will teach him to not throw the ball on the 1-yard line in a Super Bowl game, if he ever makes it there, too. 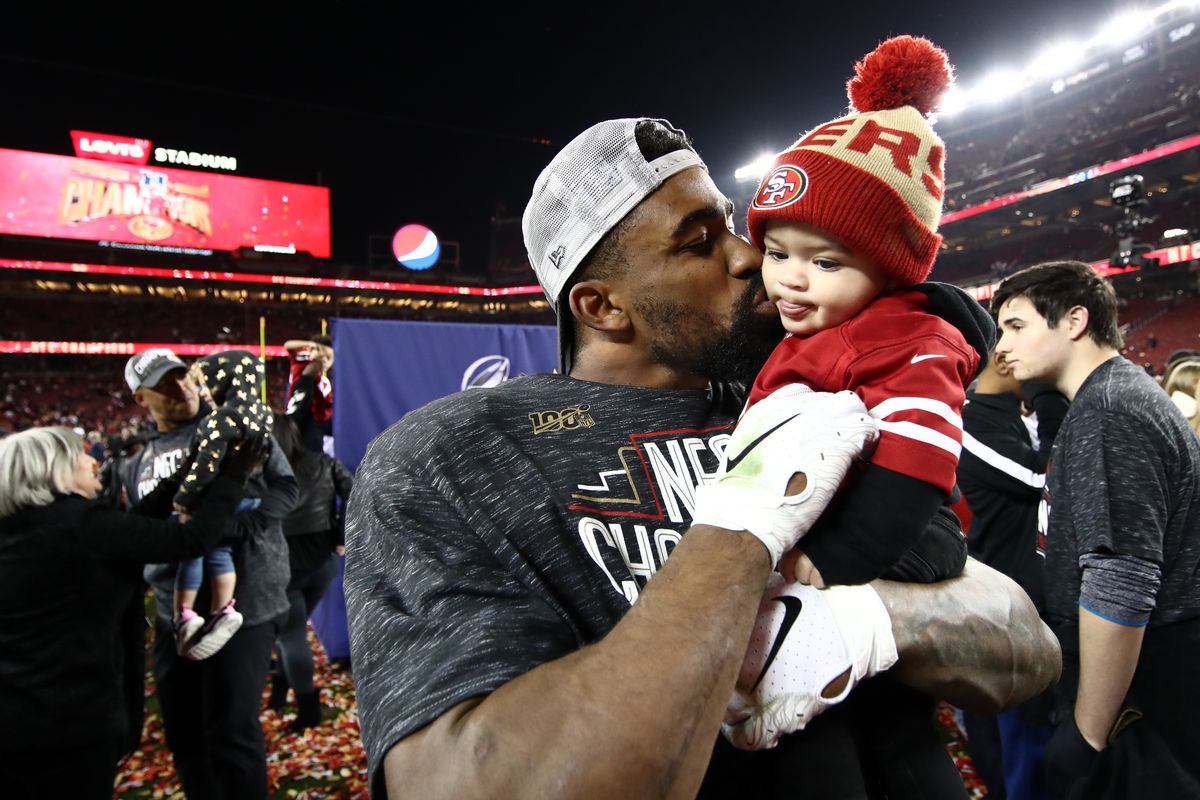 Certain moments define you in your life. Like riding a bike for the first time or kissing your first crush.

But there aren’t many moments that rival playing in a pile of confetti with your baby boy just minutes after winning an NFC championship game.

Raheem Mostert melted every heart in the entire NFL community, both players and fans alike, when he embraced his son following the huge victory this past season. And luckily, he’ll have the photos to cherish forever.

When this proud daddy holds his son Gunner, you’d swear he was holding onto his tiny version of the world.

Not every child is lucky enough to grow up with a dad, let alone a dad like the ones I listed above.

Some father figures come in all shapes and sizes. Some aren’t fathers at all. Some are the single mothers or the fathers who could have been. Some will only ever be fathers to furry friends. And that’s okay, too.

If you’re a dad and I mean, a Daddy with a capital "d", you are the light in someone’s life. 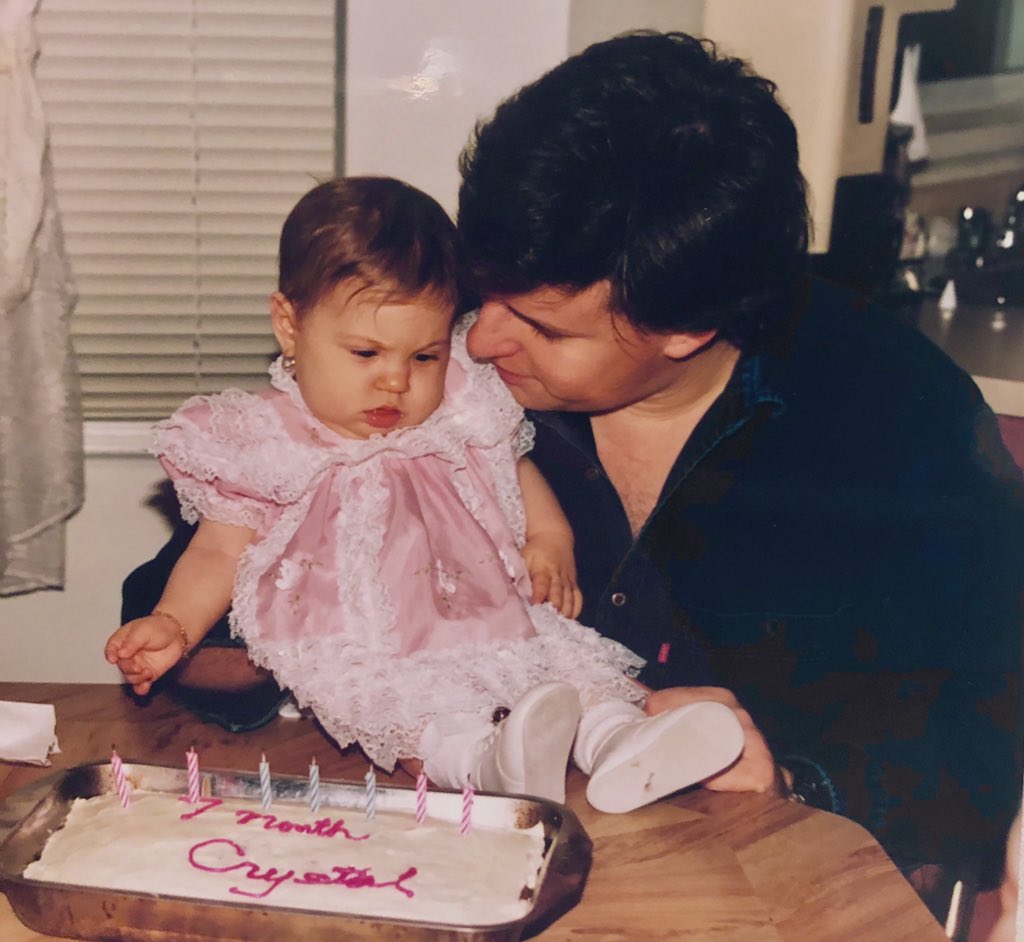 You’re a mentor, a safety blanket, a spider killer, and a best friend. You work hard every day to give your child a life that they deserve. And you never ask for much in return. Maybe a couple kisses goodnight or a snuggle on the couch while watching reruns of Funniest Home Videos.

Without you, we wouldn't be here today. And for that, we're beyond thankful.