March 17, 2020, marks the start of the 75th season since Jackie Robinson made his first appearance for the Montreal Royals.

Barnburner.ca is celebrating this special occasion with an in-depth look at the 1946 & 1947 season in this three-part series. Click here for part 1 and here for part 2.

The 1947 season was just days from starting when MLB commissioner Happy Chandler was contemplating how to deal with the controversial manager of the Dodgers, Leo Durocher. Durocher’s lifestyle and ties to know gamblers and mobsters concerned Chandler.

On April 9, 1947, one day before Brooklyn announced Robinson as joining the big-league roster Happy Chandler announced a one-year suspension of Durocher. Chandler cited Durocher’s string of moral shortcomings: gambling debts, associations with known gamblers and nightlife figures, and a scandalous marriage with charges of adultery, bigamy, and contempt of court.

Everyone outside of Brooklyn rejoiced at the Dodgers and Durocher’s misery. Gone was a crucial part of Jackie Robinson’s safety net of a manager that accepted and would lay the law down about his role on the team. Who knows what effect Durocher would have had on Robinson if he would have been allowed to manage the season. Durocher would have been fierce in defending Robinson against the opposition. Every beanball, unnecessarily hard slide, or actual spiking, would have propelled Durocher onto the field, demanding the umpires throw the perpetrator out of the game. Based on his previous history, we can be confident he would have ordered retaliatory measures by Brooklyn pitchers and baserunners. However, we will never know. 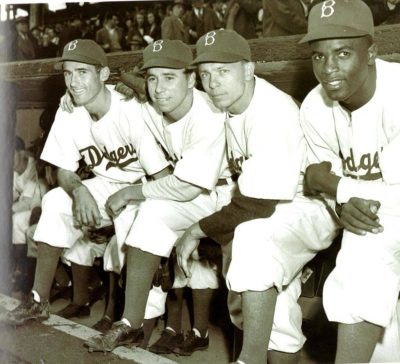 Finding themselves without a manager, Branch Rickey now had to act quickly. His safety net of Durocher and his handling of the situation throughout spring training was now gone. Who would be able to handle the stress of what the position would bring?

The press figured the ideal man would be someone on Durocher’s staff who had been with the Dodgers during spring training and prepared to deal with what Robinson would be facing. Durocher’s brain trust, comprised of three men, Ray Blades, Clay Hopper, and Jake Pitler. All three men were under contract. Blades was Durocher’s assistant manager, hired by Rickey before the 1946 season, replacing Charlie Dressen, who was lured away by Larry MacPhail to the Yankees. The New York Post ran the headline that Blades would replace Durocher as manager.

Clay Hopper was Robinson’s manager in the previous season in Montreal. Under his leadership, Robinson thrived, and he came to appreciate Robinson’s work ethic and tenacity. Jake Pitler was one of Robinson’s staunchest supporters during spring training. Undoubtedly one of them would get the nod.

However, Rickey went outside the organization to Joe McCarthy, the former Yankees manager who had won seven World Series titles with them and retired after the 1946 season. McCarthy turned him down. Rickey then asked Clyde Sukeforth, who had sent to bring Robinson from Chicago to Brooklyn to meet him and convince Robinson to sign with the Dodgers in August of 1945. Sukeforth agreed to manage the team until Rickey found a successor and penciled Robinson to bat sixth and play first base in his historic debut on April 15, 1947.

Despite his initiation into baseball history, Sukeforth did not stay on as the manager.

Once again, Branch Rickey ventured beyond the Dodgers organization. His choice had not managed since 1933 with the Phillies. His name was Burt Shotton. Retired and living in Florida at age 62, Rickey summoned Shotton to Brooklyn and pleaded with him to take over the team for the 1947 season.

Burt Shotton managed in street clothes. His laid back personality could not be any more different than the fiery Durocher. Rather than running on the field whenever Robinson found himself the victim of countless accounts of abuse, Shotton chose to let the situation resolve itself.

About the author - Mark Everett Kelly

Mark Everett Kelly is a two-time Emmy Award winner for his work as a researcher/producer at ESPN. He is also a 29-year survivor of a deadly, rare cancer called Rhabdosarcoma. Mark had to retire in 2008 due to the onset of Crohn's Disease & Lymphedema, which occurred as a direct result of radiation & chemotherapy and is unable to work a typical job.

HELP SUPPORT MARK IN HIS BATTLE

(To learn more about Mark visit his website, www.CKMagicSports.com, where you can find his book on surviving cancer, "My Scars Tell A Story." To donate to Mark in his battle against the side effects of cancer treatment, please become a patron at https://www.patreon.com/m/HelpSupportCancerSurvivor.

Under Shotton, the Dodgers won the National League pennant in 1947. Facing incredible scrutiny and disgusting racism from everywhere, Robinson endured. After getting off to a rough start, he finished the season with a .297 batting average and led the team in hits (175), runs (125), tied for the team lead in HR (12) and doubles (31) while also leading the National League in stolen bases (29). He won the first-ever Rookie of the Year Award on September 17, 11 days before the season ended. The award now has his name on it.

The Dodgers faced the New York Yankees in the World Series. After losing the first two games of the World Series at Yankee Stadium, the Dodgers won Game 3 and were down to their last out in Game 4, staring at a possible 3-1 series deficit.

On the mound for the Yankees was Bill Bevens. In his fourth season with the Yankees, Bevens was inconsistent, as evidenced by his up and down seasons in 1947. However, this day at Ebbets Field, he was unhittable. Although he walked ten batters, Bevens was one out away from throwing the first no-hitter in postseason history.

Despite his dominance, the Dodgers still were in a position to tie the series. Shotton sent up pinch-hitter Cookie Lavagetto with the tying and winning runs on base. Lavagetto drilled the ball into the gap, breaking up Bevens no-hitter and driving home two runs to give Brooklyn the win and tie the series. Brooklyn fans celebrated into the night. The fantastic thing about how that game ended as it was the last time that Bevens appeared in a game.

The Yankees were able to overcome that devastating loss and defeat the Dodgers in Game 5, taking a 3-2 series lead back to Yankee Stadium. In Game 6, Joe DiMaggio came up with two runners on trailing 8-5 in the bottom of the sixth. DiMaggio drilled a ball deep to left field, but Brooklyn reserve outfielder Al Gionfriddo, who came in as a defensive replacement for Gene Hermanski, made a historic game-saving grab to preserve the Dodgers lead.

Starting in 1947 and going through 1956, the Yankees and Dodgers faced each other six times, with the Yankees winning all but the 1955 World Series. As for Jackie Robinson, he batted .259 in the series, tying Pee Wee Reese for the team lead with seven hits. In his six World Series, which all came against the Yankees, Robinson batted .234 with 2 HR, 12 RBI, and 22 runs scored in 38 games.

The Dodgers rehired Leo Durocher for the 1948 season. After supporting Robinson during spring training in 1947, Durocher became very critical of him and the shape he was in coming into 1948. The two butted heads and their relationship soured and became very detrimental to both men. As for the season, the Dodgers got off to a rough start under Durocher. On July 16, Rickey and New York Giants owner Horace Stoneman negotiated a settlement for Durocher to be released from his contract with the Dodgers and take over as manager of the cross-town rival Giants.

With the Giants, Durocher would achieve his greatest success as a manager. His accomplishments include helping Willie Mays break into the major leagues in 1951, the same season which saw the Giants erase a 13-game deficit and finish the season winning 38 of their final 48 games. Included in that was the Giants epic win over the Dodgers in Game 3 of the 1951 National League playoffs, which culminated with Bobby Thompson’s game-winning HR off Ralph Branca. Durocher would also win his only World Championship with the Giants in 1954.

Jackie Robinson would go on to finish his Hall of Fame career in 1956. He batted .311 for his career, which would forever change the landscape of baseball. Major League Baseball voted Robinson into the Hall of Fame in 1962. Tragically, Robinson did not see the first African-American manager, something he spoke of shortly before his death in October of 1972. Frank Robinson would go on to be the first African-American to manage a baseball team when he took over as player-manager for the Cleveland Indians in 1975.

The events of the 1947 season forever will live in history as a season that altered the way the world accepted African-Americans. Many others came after to help society see their ability to be taken as equals, not only on the baseball field but as individuals who deserved to recognized for the talents they have.

Is Tom Brady the Greatest Individual Player in Any Sport?